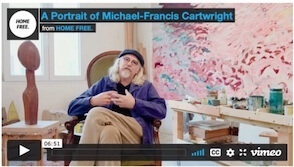 The main painting for Capital M Beijing restaurant was commissioned to cover the spinal wall of the restaurant. Like a sculpture you have to walk around the painting to see it all as it wraps around and down from the entrance and into the main dining room.  Along a small walkway to the restrooms is a painting of ‘The Path’ with fire red bronze cast handle pulls to the rest rooms made by Michael.

The overall theme is of a Journey down a river to the open sea.

After visits to Beijing, the works were finally created in the Bagni di Lucca studios which are on the river Lima. Painted over the year the work responds to the changing seasons and morning walks along the river watching the swirls of the currents and the reflection of clouds in the water and finding Chinese motifs in these.

Before leaving for Beijing the work was exhibited for the public in Bagni di Lucca, in the La Rondine Gallery and the old cinema which had become Michael’s studio for the large section on the work.